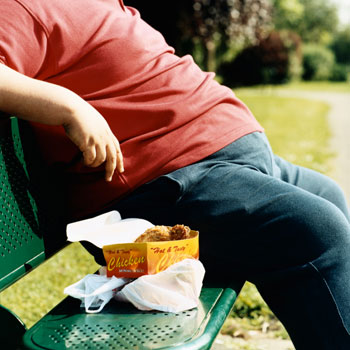 They are more than common health woes. They also happen to be five factors that raise the risk for developing Type 2 diabetes. According to the American Diabetes Association (ADA), an estimated 25.9 million people in the U.S. have diabetes, and another 79 million are at high risk with a condition known as prediabetes.

Like G.I. Joe says, knowing is half the battle. Educating yourself is the first step in lowering your risk of developing this debilitating disease. Check out the five causes below and learn how you can prevent diabetes before it's too late.

Obesity is by far the number-one diabetes risk factor that can be avoided with simple lifestyle changes. The ADA says losing just 10 to 15 pounds can make a significant difference in your ability to avoid development of Type 2 diabetes.

Obesity is a major issue, especially when you consider it contributes to nearly every other risk factor listed below. There is nothing good to say about those extra pounds and the detrimental impact they have on your health. So your number-one focus in staving off diabetes should be to maintain a healthy Body Mass Index (BMI) of 25 or less. Excess body fat also plays a role in causing diabetes, and you should strive for a waistline of 40 inches or less for men and 35 inches or less for women.

Insulin resistance is linked to obesity, although it is also caused by some endocrine disorders such as polycystic ovary syndrome. Also known as metabolic syndrome, this condition occurs when your body's cells have a diminished response to insulin. When the body's cells do not properly respond, the pancreas takes the inactivity as a sign to create more insulin.

Over time, high insulin levels become unable to compensate for the elevated sugar levels and patients develop diabetes. Insulin resistance is treatable, mainly by following a healthy diet and getting regular exercise. There are also medications such as Metformin that help decrease the overproduction of glucose in the liver and lower blood sugar. Such drugs reportedly decrease insulin resistance and improve insulin sensitivity, while returning the endocrine system to more normal function.

With high blood pressure, the heart has to work harder to pump blood through the vessels. Eventually, excessive pressure in the blood vessels can cause substantial damage, contributing to several serious medical conditions, including diabetes. Work to keep blood pressure less than 120/80 by following a healthy diet and getting plenty of exercise. Your doctor also may prescribe medication to help lower your blood pressure.

It's important to keep an eye on those tris -- triglycerides in excess of 100 mg/dL also may be a sign of diabetes. High triglycerides can cause reduced blood flow, which slows the removal of sugars from the bloodstream and the delivery of insulin to the body.

Just as there is nothing good to say about obesity, there are absolutely no perks to lighting up. Zero. Zip. Zilch. The chemicals found in tobacco damage blood vessels, decrease the amount of oxygen delivered to cells, raise LDL and boost blood pressure.

Smoking doesn't just wreak havoc on the respiratory system; it drags the cardiovascular system down with it. Of course, a healthy cardio system is necessary for the pancreas to deliver insulin properly and control blood sugar levels. No butts about it, where there's smoke, there's often diabetes.

The Mother of All Problems: Pregnancy & Gestational Diabetes

Oh, baby! Diabetes can be a serious issue for expecting moms. Believe it or not, pregnancy causes the onset of a temporary type of diabetes known as gestational diabetes. The hormones produced by the placenta and other pregnancy-related factors contribute to insulin resistance, which was previously noted as a precursor of diabetes.


Gestational diabetes most often occurs in the later stages of pregnancy. Women who were overweight or obese prior to becoming pregnant are more prone to gestational diabetes. Also on the watchlist are those moms-to-be with a family history of diabetes.

Prevention is the Best Medicine

While it's hard to dodge the genetics bullet as a risk factor, there are plenty of ways to wage war against diabetes. Obviously, consuming a balanced diet and engaging in regular exercise are a recurring theme -- and with good reason.

Studies show that people who engage in a regular exercise plan and keep their weight at healthy levels tend to have lower occurrences of diabetes and related conditions such as insulin resistance.


The National Institute of Diabetes and Digestive and Kidney Diseases conducted a 5-year study on the effectiveness of different treatments for the prevention or delay of Type 2 diabetes. The study concluded that positive lifestyle changes in diet and exercise produced a 58 percent reduction in cases of diabetes. Patients who used Metformin, a medication used to control blood sugar, decreased the instance of diabetes by 31 percent.

Researchers suggest a diet low in refined sugars and carbohydrates and high in:

Daily exercise, as moderate as brisk walking for 30 minutes a day, has shown to be effective at decreasing weight and improving overall health. Doctors suggest a combination of aerobic exercises and resistance training, which has been found to control blood sugar more effectively than either type of exercise alone.

While there is no single cure for diabetes, it is possible to reverse the onset of Type 2 diabetes by changing diet, exercising more and managing other risk factors. Talk to your doctor about your diabetic risk and develop a plan to keep yourself healthy and fit.