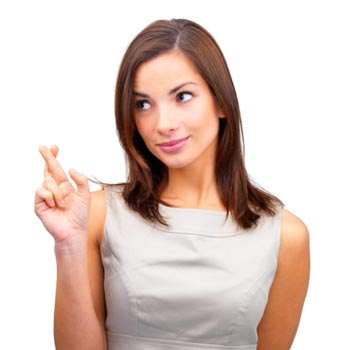 How many do you tell in your relationship?

Lying is something everyone does, and it's not always wrong. Serious lies that betray someone's trust are not OK, and no one should tell those. But white lies are perfectly OK in a relationship and can even be good for it.{relatedarticles}

White lies help save your partner from hurt feelings, preserve the integrity of the relationship and keep you sane, so you don't have to deal with every little situation that could potentially end in an argument.

So which relationship lies are OK to tell?


Relationship Lie #1: Sex is always amazing with you!

While it may not be as amazing as you are saying, it's important to tell him this so he can feel as though he has the power to make your toes curl. It will boost his self-confidence and actually improve your sex life. When someone believes they are competent in something, they will be, and that is how it ends up benefiting you.

Offering to pay for dinner sometimes, even though you believe he should treat you, tells him that you appreciate it when he does pay for you. And it's likely he'll pay for the dinner anyway because he wants to prove he can pay for it and take care of you.{relatedarticles}

Relationship Lie #3: I love this shirt you bought me!

Would it be better if you told him the shirt is ugly? No, it would be rude. You don't want to hurt his feelings and you don't want to seem ungrateful, so telling him you love it is an OK relationship lie to tell.


Relationship Lie #4: We're going to visit your parents this weekend? I can't wait!

When you come between him and his family, he may resent you. Don't ruin your relationship because of his family. Telling him you enjoy spending time with his family and just biting your tongue the whole time is a perfectly good lie to tell in a relationship.

Relationship Lie #5: My parents love you!

So maybe your dad thinks he's a loser, and your mom thinks he's unattractive, but you couldn't tell your partner that. Instead, you tell him a lie so a civil war doesn't break out between him and your parents.{relatedarticles}

Relationship Lie #6: I agree with you completely.

When you disagree with him, it often turns into an argument, right? Some days you just don't have the strength or it's just not worth your time. By agreeing with him, you save yourself from having to explain why you feel different and stop him from trying to convince you of his beliefs.

Relationship Lie #7: You are better than my ex in every way.

Men have insecurities as much as women do, and this is particularly true when it comes to ex-boyfriends. To help him feel better about himself, tell him he is much better than your ex, even if you don't necessarily feel that way.


Relationship Lie #8: My favorite shirt you got me ripped, so I had to throw it out.

The truth may be that you think it's ugly, and you won't ever wear it, so there's no sense in keeping it in your closet. Telling him that you threw it away because you didn't like it would hurt his feelings. However, telling him it ripped or was stained beyond repair gives you a perfectly good reason to throw it out without damaging his self-esteem.

Relationship Lie #9: That shirt is so sexy. Wear it only for me.

Relationship Lie #10: Do these pants make my butt look big? You can tell me; I won't get mad.

This lie is only OK to tell if you don't get mad at him. While you may not like the answer, if he says that it dos make your butt look big, you cannot express anger over his answer.

If you can't control your reaction when he says that you don't quite look the way you would like to look, it's better not to tell this lie.


Keep in mind that many men know that when a woman says she won't get mad, she's lying and will get upset. So men who realize this will lie right back with, "It's fantastic on you!" -- even if it does make you look big.

How to Decide if a Relationship Lie Is OK

Before you tell a lie, think about how it will affect your man. Answer the following questions to decide if it's OK.

If you can answer these questions with a clear conscience that your white lie won't hurt him or the relationship, the lie is most likely OK to tell.{relatedarticles}

What to Do if Caught in the Lie

Sometimes people who tell white lies get caught. When this happens, the best thing to do is to come clean. Don't try to come up with another lie to cover up your initial lie. Remember the phrase, "Oh, the tangled web we weave."

Tell him that you told the lie because you didn't want to hurt him with the truth. You love him too much to see him upset, especially when the cause is you.

He may still be upset, but if you show that you only meant to be loyal and supportive, he will come around to see you only wanted the best for him because you love him.