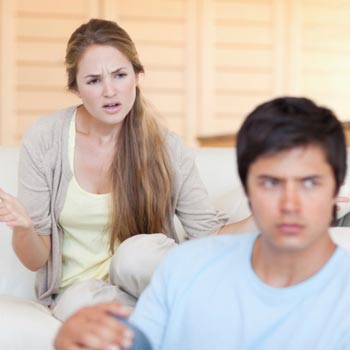 At the beginning of a relationship you tend to see only those things that are most endearing. It takes no effort to see only the best in your man. But a funny thing about relationships is that as they grow, the things you once found endearing become downright irritating.

Suddenly all of his bad habits are shining like a bright beacon and you are ready to snuff out the light. But can you really break his bad habits?

Is this really a bad habit?

The first thing you have to ask yourself is if what you are dealing with is really a bad habit or simply an annoyance. If it's not addressed, a bad habit could end up becoming a destructive force in your relationship. But an annoyance is something you can usually learn to live with.

If you decide that something he does is just pesky, learn to let it go. We all have a way of rubbing someone the wrong way. All you have to do is ask him and I'm sure he will tell you about the things you do that annoy him.

If on the other hand you decide it's a deal breaker, then it's time to address it. How you go about doing this can mean the difference between a broken habit and a broken relationship.


One Habit at a Time

No one likes to be presented with a laundry list of all the things they do wrong. If you are going to deal with this once and for all, do it one habit at a time.

As soon as you start rattling off your list, he will immediately tune you out. Eventually he will move into defense mode. So determine now to tackle just one habit at a time, starting with the worst offense.

When you begin to see progress with one, then move onto the next habit. Approach each one with a desire to help him, not as a way to spotlight all his faults.

Alerting someone to their bad habits can be a sensitive topic. So the way you approach it is important. Determine ahead of time that you won't nag.

Nagging makes the person feel like you are talking down to them. It comes across as demeaning or to some men, like nails across a chalkboard. It will almost always have the opposite effect of what you are trying to accomplish.


It's best to start off by asking indirect questions such as, "Why do you suppose you..." and then fill in the blank with the bad habit. Your question might take him off guard. It could be that he didn't even realize he was doing it.

Or he might not have known that what he was doing was a concern to you. By asking a question, you allow him the opportunity to think about a solution, instead of immediately feeling like he has to defend himself.

However you should also be prepared for denial. Some people just really have no clue they are doing something that has become a bad habit. If he denies it, be ready to give him specific examples.

If you generalize his bad habits, it will be harder for him to see them as real issues. However, if you have concrete examples of behaviors you think are toxic, then he has a better chance to understand and make concrete changes that you can track.

When you share your examples, don't use it as an opportunity to vent. Talk in a calm and gentle manner. He will be more receptive to what you have to say.

At the same time, you want to express why his bad habit could be destructive to your relationship. If you are going to bring up what could be a sensitive topic, there should be a valid reason for it.


You should be able to clearly explain how it makes you feel. But be careful to not use words such as, "You do this" or "You make me feel," which will immediately put him on defense. Instead say, "I feel" or "It makes me feel."

The idea isn't to open his eyes to a bad habit and then leave it at that. Be willing to help him find a solution.

Try to come up with realistic, helpful ideas. Telling someone to just stop doing something isn't a way to provide support and motivation. You should be willing to be part of the solution.

For instance, you may have started to feel more like a maid to your man. He drops his dirty clothes wherever he happens to be standing at the moment. It's a bad habit that you aren't willing to put up with.

A simple solution might be providing a basket or laundry hamper in the room he most often gets undressed. If he doesn't have the tools available to change his habit, don't expect much progress.


Be His Accountability Partner

Once the bad habit has been brought to light, help him be more accountable. Not in a way that you are constantly bringing it up but in gentle reminders.

You should both decide on a reminder that won't be offensive. Using the dirty clothes as an example, instead of shouting, "There you go again, leaving your mess all over for me to clean up!" turn it into something more playful.

Remember that bad habits don't change overnight. Expect him to slip up and at times even resist. How you react will determine how the situation plays out.

When it comes right down to it, no one can really break someone else's bad habits. If you try to exert your will over another person's life, it usually ends up backfiring. They have to be willing to make the effort, but you can be their biggest cheerleader.