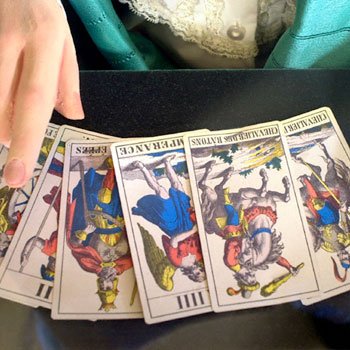 What Are Tarot Cards?
Made up of no less than 78 cards, each deck of Tarot cards are all the same. Tarot cards come in all sizes with all types of artwork on both the front and back -- some people even make their own Tarot cards. The meaning and the message of each one of those 78 cards, however, always remains the same.

Tarot cards were first used by the Celtic people more than 2,000 years ago. Many believe that Tarot cards serve only to tell the future, but this is not true. When used traditionally, Tarot cards speak of the past and present and are supposed to give clues and ideas about the future's potential.

What's in the Cards?
Tarot cards are made up of four suits -- much like any regular deck of cards. In fact, Tarot cards have all the same values as traditional playing cards: ace through king for each suit. Only one extra card is added to the royal family in Tarot cards -- the squire -- his position is just under that of the knave (also known as the jack).

The suits are as follows: wands, which in general speak of esoteric issues such as spirituality or creativity; swords, which speak of conflicts and tensions; cups (or pentacles), which are always about money; and cups, which deal in relationship matters and love. The other 22 cards of the standard Tarot deck are called the Major Arcana cards, and are all very specific. Cards such as the Devil, the Tower, and Death are in the Major Arcana.