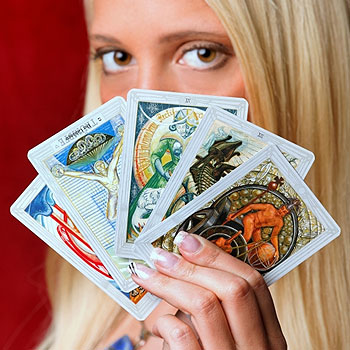 The world of Tarot is a wondrous and fascinating place filled with mystical power and interesting legend. How the various tarot decks evolved from their original form to that of the common deck of playing cards is one of history's best stories, but let's take a look at some of the most well known cards that make up the old-fashioned tarot deck.

Remember, however, that many different tarot decks contain different cards from one another. Especially in the case of the minor arcana, the "suits" can change from deck to deck. There isn't any consensus "right" deck, they all have their own powers to help a trained reader divine the future.

The Fool -- One of the best known cards in the tarot deck, the fool can symbolize many different things based on the question asked before the reading. In most cases, the fool brings about such descriptions as "immaturity, adventure, boldness, freedom" and "inexperience." In history, the Fool has the special distinction of usually having the number zero. While that designation isn't a uniform assignment across all decks, the Fool is usually seen as either the final trump card, the first trump card or even a completely separate card apart from the other trumps. Modern interpretations of the fool vary from the context in which the card fits into the question asked and the reader, but in most cases, the fool is interpreted as standing for folly and inexperience. It doesn't necessarily have to have a negative connotation, but it is interpreted that way in most cases.

Death -- One of the most dreaded cards in the tarot deck, but also one of the most misunderstood. The card is only interpreted by the most literal readers as meaning physical death. In almost all cases, the card stands for a change; usually a deep and through change in one's life. For some, the death card can be a positive if the change interpreted is the death of something negative. The number assigned to the card is 13, of course, an unlucky number in most Western cultures. In modern decks of playing cards, the ace of spades is considered to be the descendant of the death card, and is still referred to as such by many card players.


The Devil -- Card fifteen is also one of the most well known tarot cards. The devil, in most cases, stands for animal lust and vice. It can also be interpreted as a lack of morality and hedonism over other more moderate choices in life. Most readers believe that the Devil card represents a lack of growth or the inability to stop behavior that harms oneself. The card, in most cases, is considered negative, but there is also a large amount of flexibility in the Devil card. The subject receiving the reading may be caught in a particular behavior, but that behavior can change and the impact of the devil can be removed.

The Moon -- Card eighteen of the tarot deck is the Moon. The card is usually associated with the ideas of tension, deception, confusion and anxiety. The Moon is also thought to be associated with doubt, worry, unrealistic ideas and illusion. Most readers interpret the Moon as a lack of vision or purpose in a person's life. A need to find the right path back to goals and meaning is needed before all is lost. It can also mean that an adventure awaits and to be brave when facing unknown circumstances. In most cases, the Moon has a negative connotation, but not in all.

The Lovers -- Card six in the tarot deck is The Lovers. The card is usually interpreted to mean union, passion and sexuality, as well as bonding, romance and heart. The card is seen almost universally as a positive, a sign that the subject has a positive, warm and healthy relationship in their life. There is a modicum of sacrifice with the Lovers card, the idea that the bachelor life will need to be jettisoned in favor of a caring and fulfilling relationship.


The card is considered a positive building block when it comes up during a reading, a sign of good things to come.

Judgment -- Card twenty in the tarot deck is Judgment. This is an almost universally positive card that most readers interpret to stand for hope, renewal, redemption and absolution. Even though with Judgment, there is a positive and negative side, this card is almost always thought to be a positive.

The tarot deck is filled with dozens of interesting stories and interpretations. The cards listed here can mean many different things based on the question asked, the interpretation and if the card is reversed or not. The energy and magic of tarot is eternal and it awaits your questions today.

About the Author: Free Tarot Reading http://www.tarotreadingsecrets.com/personalCards/index.php Make use of the amazing tarot reading to understand and determine your favorable or unfavorable life options, maximize your opportunities, improve personal and family relationships! Take our amazingly accurate Free Tarot Card Reading http://www.TarotReadingSecrets.com today and learn how you can make wise and informed life decisions!