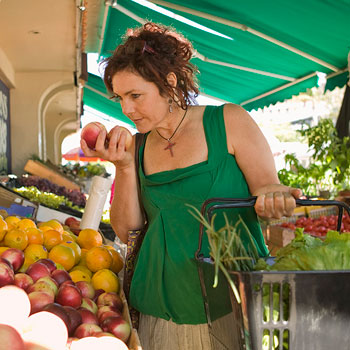 So you want to buy organic without breaking the bank? If you're not able to buy all organic produce, you can pick and choose to maximize health benefits. In general, fruits and vegetables with thin, edible skins will pass on more pesticides and herbicides to the consumer. Those with thick, removable skins pose fewer health risks, while wax coatings can make it more difficult to remove surface pesticide residue. It also helps to know which crops are the most pesticide-intensive.

The next time you're doing your shopping, put these fruits and veggies at the top of your priority list for buying organic:

Apples: These crisp fruits of fall are often featured in the USDA's top 10 list of contaminated fruits. Apples are sprayed with pesticides several times per season. Even after peeling and coring, a conventionally-grown apple contains detectable levels of multiple pesticides.

Cherries: In order to keep worms at bay, cherries are sprayed heavily.

Imported Grapes: When consumers buy grapes from other countries out of season, they unwittingly ingest a host of pesticides that have been banned in the United States.


Peaches and Nectarines: Bugs love their juicy sweetness as much as we do, so stick with organic.

Pears: In addition to being sprayed heavily, the very porous skin of the pear allows even more pesticides into the flesh of the fruit than apple skin.

Strawberries and Raspberries: Sweet and luscious, oh-so-delicious. See all those tiny depressions on the thin skin? Pesticide collectors! Strawberries also drink in pesticides through their core (the white part of the strawberry).

Celery. Pesticide puddle -- doesn't that sound appetizing? Water collects in the bottoms of celery stalks, and so do pesticides.


Spinach and Lettuce. Try this nifty experiment. Put a white cut flower in a glass of tinted water and see its color change. Now pretend this is your lettuce in a toxic stew. Thirsty plants like spinach and lettuce drink pesticides in through their stalks, so opt for organic.If you're in the market for conventionally-grown produce, the following options are the safest if you're not going the organic route:

Asparagus: Not as popular with bugs as other vegetables, so you benefit from the much lower pesticide input.

Avocados: Hooray for thick skins! Avocados have one of the lowest pesticide contents.

Bananas and Pineapples: They both have thick, removable skin. Bananas also grow well above ground level and carry a very low pesticide load.

Blueberries: In testing, blueberries showed much lower levels of pesticides than other berries.

Domestic grapes: These are far safer than their imported counterparts, so look for labels to ensure that yours were grown in the United States.

Broccoli and cabbage: Because these cool-weather veggies are not typically plagued by pests, pesticide levels are very low.
Onions: Very little pesticide required, and the outer layer is removed before eating.

Peas: Snug inside the pod, they are protected from pesticides. This is also a low-spray crop, further reducing health risks.

Remember, the safer foods aren't necessarily chemical-free, so make sure to wash them thoroughly before eating. Now that you know that organic eating isn't all or nothing, go support some organic growers while you save money on safer fruits and veggies.