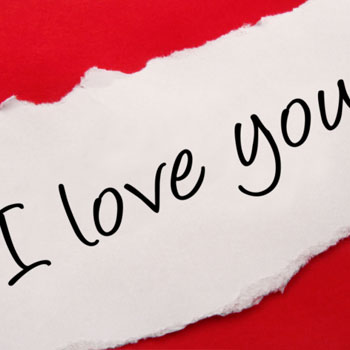 Who would've thought saying three little words could be so difficult or open up such a can of worms for a couple who cares about one another? Unfortunately, in the beginnings of a relationship that has the potential to be serious, that's exactly how saying "I love you" is viewed. And there are plenty of stereotypes out there: Women always say it first. A man should NEVER say it first. And there are the awkward scenarios that play out when one partner says it before the feeling is entirely mutual. The truth is that someone has to say it at some point when the relationship is ready to go to the next level. Does it really matter who it is? Not so much. But men and women have preconceived notions on when it should be said, according to a recent study. Most survey respondents said women would say "I love you" first - an average of 23 days sooner than a man. However, the truth is that when couples were surveyed, 61-70 percent said the man had said it first and considered saying it a lot sooner than the woman.


Timing is everything among the sexes as well. The study found that women preferred to hear it after the couple had had sex -- an affirmation beforehand seemed to indicate insincerity and untrustworthiness on the man's part. Men preferred hearing it before sex because it seemed more "honest." Certainly there are no hard-and-fast rules about when or if you should say it, but it goes without saying that a declaration of love seems downright weird a couple dates into the relationship. When the time is right, one of you will know and say those three words. In the meantime, show you care through your actions, not your words.