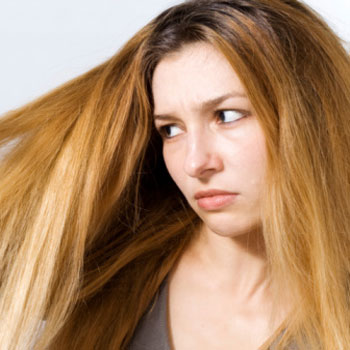 Nothing is worse than having that limp, lank, need-a-shower look. Except for having that look right after a shower. Oily hair is a curse for many women, who tend to compensate by washing hair even more frequently. However, frequent washing can compound the problem because oily hair isn't caused by an oily scalp. The opposite is true - women with dry scalps tend to have oily hair because their scalps overcompensate for the dryness by producing more oil, which gets deposited on hair. First, consider your style and skin type. If your hair is oily around your face, or you find that your bangs get oily fast, then try putting hair back in a barrette or ponytail to keep it off your face. There are plenty of products on the market designated for "dry or damaged hair," but those who have oily hair need products that don't weigh hair down or make it appear greasier.


Try shampooing less so that you don't strip the scalp of those much-needed oils. This way, your scalp won't produce too much oil. Dry shampoo is a lifesaver for in-between touch-ups. When you do wash, try a clarifying shampoo that can clear any buildup, styling product residue or anything else weighing your hair down. Reduce heat styling, which also dries the scalp. If you need a little texture, look for a spray wax, like Paul Mitchell, which will give limp hair texture and volume. When you need a pick-me-up for lank, weighed-down hair, then try a hair powder like Aveda's Hair Potion. When applied at the roots, it gives them fullness and helps restore volume to oily tresses.